Inokim electric scooters, designed in Israel, are sold in 30 countries as a smart green solution for mobility in large cities.

Behind the buzz around electric cars and ride-sharing apps, two Israeli men separately sensed the need for a light urban mobility alternative: a folding electric scooter.

Inokim scooters, launched in 2009 under the brand MyWay, were the green brainchild of award-winning product designer-engineer-entrepreneur Nimrod Riccardo Sapir. 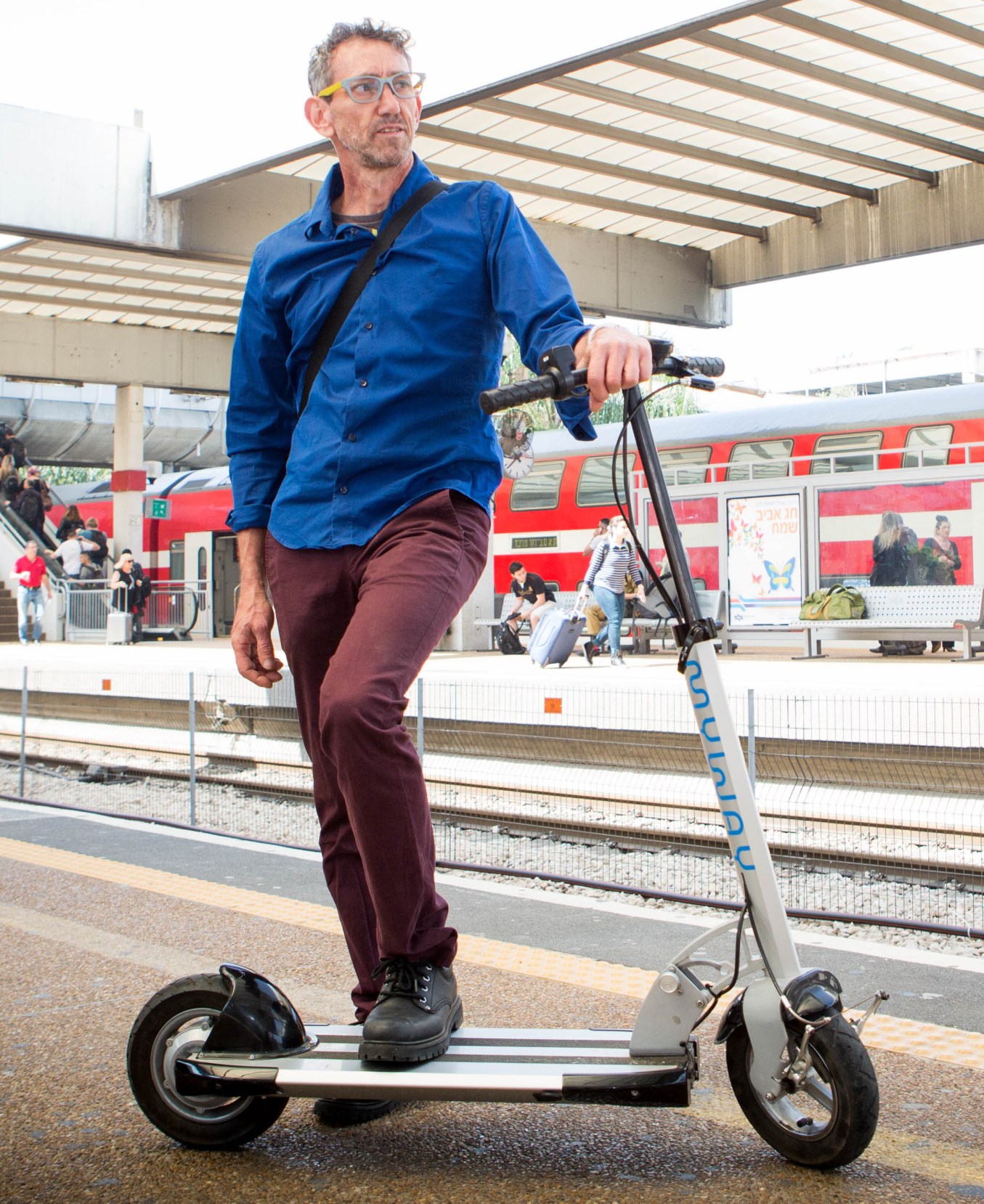 Inokim designer Nimrod Sapir with one of his scooters at an Israeli railroad station. Photo by Shlomi Yosef

Kfir Ben-Shooshan read about Sapir’s 12-kilo (26-pound) folding e-scooters on a trip home to Israel from Miami, where he’d settled after his military service 10 years before and had built a chain of clothing stores. On his business travels, he experienced terrible traffic tie-ups getting from airports to city centers, and he felt Sapir’s invention could provide an answer.

After contacting Sapir, Ben-Shooshan learned that the scooter’s Chinese manufacturer-marketer already had a short-term contract with a seller in Israel. But sales were sluggish.

Two years ago, when Ben-Shooshan was about to take his girlfriend on vacation to Thailand to propose marriage, the Chinese company sent him a business proposal. From Thailand, he flew to Shanghai for 24 hours and clinched a contract.

Moving back to Israel, Ben-Shooshan revamped the sales strategy, setting up five stores in high-end locations. Another 10 locations are planned in the next year.

“When I grew the business so successfully in Israel, the company in China offered me shares, so now I own 30 percent of the business and we sell through franchises all over the world,” says Ben-Shooshan, who fully owns Inokim Israel and Inokim USA. (“Inokim” means “speed” in Japanese.)

“Before I came in, only 10,000 units had been sold all over the world,” Ben-Shooshan tells ISRAEL21c from his Tel Aviv office. “Last year we surpassed 50,000 units. We just started US sales in September, so I’m sure that number will double.”

The first Inokim USA franchise is in the Chelsea neighborhood of Manhattan. Ben-Shooshan plans to start selling online and in major retailers as well.

“We want to be in every big city in the world, focusing on business people for transportation in downtown areas. You can carry it with you on the train or bus, or you can put it in your trunk and park your car outside the city for far less.”

Sapir has won several industry awards as the first electric scooter designer to overcome the tradeoff between performance and weight: Inokim scooters are not only attractive and robust but also quick-folding and lightweight.

Inokim scooters run on rechargeable lithium-ion batteries like those used in electric and hybrid cars. It takes five to six hours to fully charge an empty battery.

Three models are on the market with three more coming in the next six months, none weighing more than 15 kilos. Each can carry a person weighing up to 130 kilos. 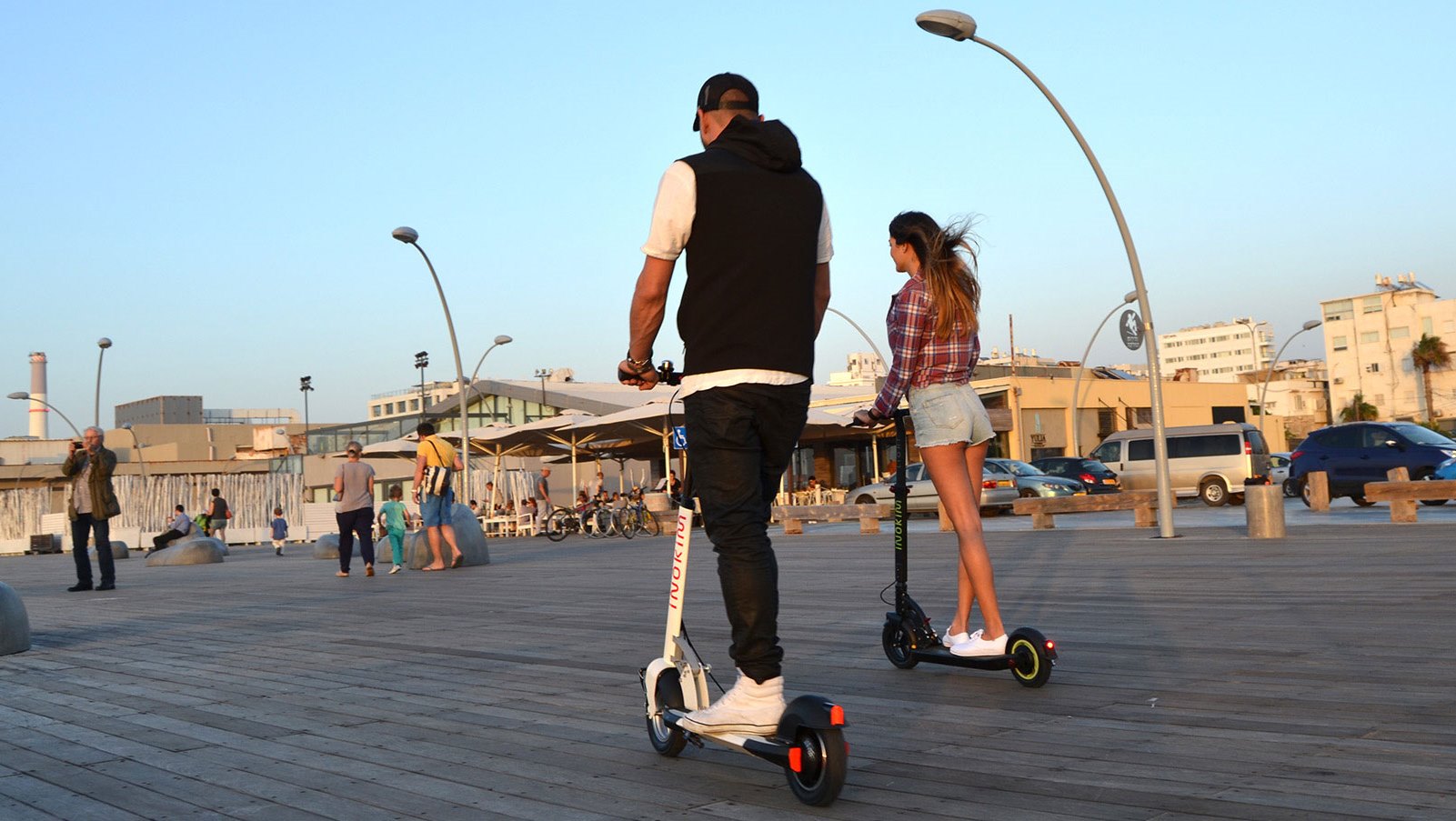 The newest Quick-3 model, with a 48-volt motor, comes with an app that has several functions, from protecting the scooters against theft to providing a social network for Inokim users. All models can be zipped into a carrying case that has a shoulder strap.

“When I first came up with the idea for a folding electric scooter, I was looking for investors and they wanted me to show them the market. I couldn’t, because it didn’t exist,” Sapir says. “But I knew that it’s a ‘must’ product to have. And now we’re producing over 1,000 per month. There are many, many copies of my design today.”

Ben-Shooshan says most of the copycats simply put an electric motor onto a children’s scooter, using components from different manufacturers. “Our factory in Shaghai makes every component from wheels to batteries,” he says.

Through January 5, 2017, Inokim is running an international photo contest for its customers.

The top winner will be invited to China for a tour of the factory, a company dinner and a free scooter. Two runners-up each will receive a special-edition scooter.